Add a third dimension to your photos: 3D Plugins for Photoshop Category: Rumor has it that Photoshop CS3 will offer some 3D capabilities. There is no official list of features, but it seems that you will be able to open most popular 3D objects formats (objects, not scenes though) and presumably, have access to thier color and texture properties. But as of this writing the only official word is that these 3D capabilities are not active in Photoshop CS3 beta preview. So, until Photoshop CS3 is released, you will have to use the available plugins to create 3D images inside Photoshop.

Here’s the most complete list of Adobe Photoshop 3D plugins I’ve managed to gather. Take a look at it, I’m sure that you will find many plugins that you never knew they existed. 3D scene setup and model rendering plugins Andromeda Series 2 Three-D Luxe (Mac/Win) This plugin is a true 3-D surface wrapping, viewpoint control and shading tool. Plus an additional Interface and Surface Library for producing dropout, layered or combined wrapped images and effects. Andromeda Series 2 Three-D Luxe is a very simple, yet powerful, plugin that lets you create beautifully rendered models using a wide array of textures and colors.

Digital Element ModelShop (Mac/Win) This plugin is similar to Andromeda’s Series 2 Three-D Luxe, but it comes with 50 free models and also lets you import most popular 3d models format. You can build more complex scenes over your photographs such as the one in the image at the left. Right Hemisphere Deep Paint 3D (Win) Deep Paint 3D is an intuitive, easy to use tool to paint and texture 3D models interactively in 3D. This is an standalone application, but it integrates with Photoshop using a companion plugin to switch between both applications. Digital Element Verdant (Mac/Win) Verdant is an amazing Plugin. 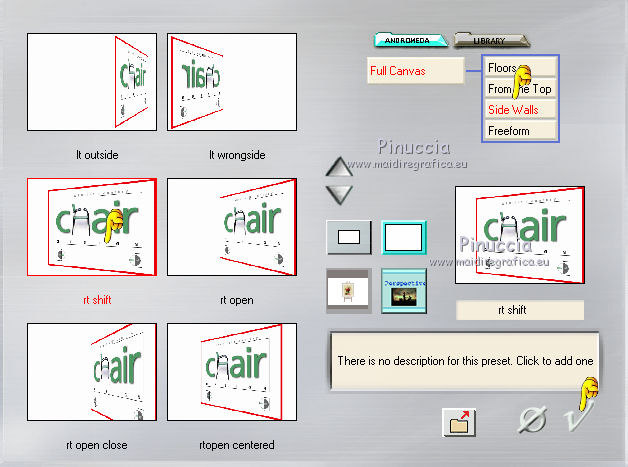 It lets you build procedural 3D plants. The Verdant Plant Mechanic employs simple primitives and gives you the freedom to make whatever plant you want.

AVBros Page Curl Pro (Mac/Win) This plug-in helps you make realistic and high quality curls and paper folding effects. Provides you with the ability to set an image from file as a backside content of the page to be curled. Xaos Tools Type Caster (Mac/Win) TypeCaster turns ordinary type into broadcast-quality 3D titles with depth, texture, and contours that lift off the page. TypeCaster offers 30 built-in project looks you can use to create eye-popping type quickly and easily, even if you’ve never used a 3D program before. NOTE: Type Caster is an old plugin, ask for system compatibility if you plan to purchase it. Vertigo 3D HotText (Mac/Win) Another 3D text generator. Flow your text along a path, add textures, interactively position lights and use the virtual camera to capture the right shot. NOTE: Although you can still purchase this plugin, support is not offered anymore. NOT COMPATIBLE WITH ADOBE CS LINE OR OS X. Check Windows specs prior buying.

Vertigo 3D Dizzy (Mac) Vertigo 3D Dizzy allows users to import 3D models, move them into any position, create lighting effects, and choose from a number of rendering effects. Vertigo 3D Dizzy is an upgraded version of Quickspace, another plugin from this company. NOTE: Although you can still purchase this plugin, support is not offered anymore. NOT COMPATIBLE WITH ADOBE CS LINE OR OS X. Andromeda Shadow (Mac/Win) Andromeda’s Shadow Plug-In is the most advanced shadowing plug-in available.

It’s uniqueness is in using 3-D geometry to cast realistic shadows. A shadow of your input image is imposed on a Casting Plane that can then be manipulated in 3-D space behind or in front of the Input Image. Richard Rosenman 3D Sphere Pro (Win) A full featured and inexpensive sphere generator plugin.

For more information about this plugin. There is a freeware version of this plugin. 3D Maker and 3D Shadow plugins (Win) 3D maker is an inexpensive 3D plugin that lets you add perspective and volume effects to shapes. 3D Shadow is a free shadow perspective plugin. Other 3D plugins for Photoshop The following list is a showcase of old and discontinued 3D Plugins. Very little information is available for these old plugins that have been left abandoned by their developer company. Scene builder was part of KPT 6 now owned by Corel, who is selling this plugin as part of the KPT Collection.

Although the Kpt collection specs states clearly that KPT 6 is part of the collection, the Scene Builder plugin it is not listed there. Chances are that it is simply an error, but if you plan to purchase KPT collection, check with the vendor if Scene Builder is included. As a bonus, KPT 3 had an extremely cool sphere generator plugin. KPT 3 was bundled with KPT 5 and KPT 5 is part of this KPT Collection. An amazing 3D model creator and rendering for Photoshop that has been discontinued by Zaxwerks. You won’t find any mention of it in the developer company site.

They only sell an After Effects version. The link in the title points to an online seller where you can download a demo and eventually purchase the old version. As with every discontinued product, ask everything you need to know prior making the purchase. This extremely old plugin was very famous many years ago. With it you could turn a grayscale image into a 3D mesh and export it as a DXF to another 3D program.

Only for Mac, no windows version. The link in the title points to a forum discussion of this plugin with some screen shots. Download links at that forum are dead.